My Year In Review, Looking Ahead

With just one outreach left for 2016, another year of doing dream interpretations, spiritual readings, inner healing, and trying to love people as Jesus did – and does – is almost over. I’m already planning for next year. As best I can remember, these are the outreaches I did this past year:

February: Body, Mind, Spirit Expo. A New Age event in Raleigh, NC.
March: Another New Age fair in Raleigh, the name of which I don’t remember.
May: Burning Nest, a Burning Man sanctioned transformational festival, otherwise known as a “regional Burn”, in Port Talbot, Wales.
June: How The Light Gets In, a music and philosophy festival in Hay-on-Wye, England,
followed by the Summer Solstice festival at the Stonehenge Campground and at Stonehenge near Amesbury, England.
July: The Wild Goose Festival in Hot Springs, NC
August: Three Days of Light, a transformational festival in Ferguson, NC.
October: Haunted Happenings, a month long Halloween celebration in Salem MA.
Upcoming in November: Health and Wellness Weekend, a three day, mostly New Age fair in Lyons Falls, NY.

I worked with various teams of amazing people at each of these. My plan is to repeat all of them and add at least two more besides: Transformus, a regional Burn near Asheville, NC; and, a possible return to Burning Man after a hiatus from that festival this year. I may also add one or two festivals in the UK as well. I have new ideas for some of these, primarily the transformational ones, that I’m pretty excited about. For several of the festivals I go to, I join with Papy Fisher, and his amazing group of young people that he has discipled. Papy always adds hospitality, usually in the form of food, to the mix of ministry. The increase in effectiveness this adds can’t be overstated: It’s invaluable to forming meaningful relationships with people, and that’s really what ministry is all about. 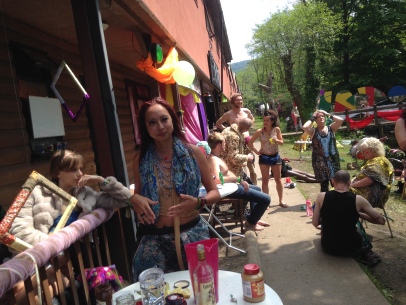 Festival ministry isn’t easy. It’s a lot of work, it’s kind of expensive and the festival environment isn’t for everyone. You have to be a little tough, and more than a little crazy and wild, and though we tend to be willing to work alongside anyone who wants to be a part, there are those I personally have discouraged from getting into it. There are pitfalls and temptations and we have suffered a few casualties over the years. But we’re always on the lookout for good, tough recruits, or seasoned veterans to join us.

Festivals are changing the world. There is a huge number of festivals all over the world, and yet the Church either ignores them or is completely unaware of them. That’s probably a good thing, since being crazy and wild isn’t exactly encouraged in the church, generally speaking. Maybe you’re crazy and wild enough. If so, let’s talk. Maybe you’d like to start your own festival ministry team. If so, we can train you and your people – or just give advice.

Currently, I’m looking to create a small team of people for Burning Man 2017, which is pretty much recognized as the ultimate transformational festival. With over 70,000 participants in the Nevada desert, it is (I believe) the largest such festival in the world. And while it’s still many months off (“The man burns in 304 days!”), planning needs to start now. Tickets usually go on sale in January. It isn’t cheap. and it’ll test you. But for many festival people, it is their favorite festival. I think it is my favorite. Do you think this is something you could do? Let me know.

How can I help you? Do you have a dream you need interpreted? Do you need healing for trauma or emotional wounds, or do you just feel “stuck”? Are you part of a group that is interested in prophetic evangelism and outreach? I offer personal ministry, in person or via Skype, and personal or group training.

2 Comments on “My Year In Review, Looking Ahead”