Last weekend I once again joined with Kelly Williams, Papy Fisher and a few of his Desanka team in festival ministry, this time at the five year old 3 Days of Light festival, which Kelly had been working on getting into for a couple of years, held this year in the mountains of Ferguson, NC. I have worked with this group at the Wild Goose festival several times, and last year at Haunted Happenings in Salem, MA. It was the first time at this festival for any of us. In addition to doing the usual prophetic ministry out of a tent, Papy was determined to serve the festival in some way similar to what he has done at Wild Goose. So, with Caroline Buchanan’s capable leading, in addition to prophetic ministry, we provided free delicious meals, water, coffee, the occasional roll of duct tape, etc., to anyone and everyone. The impact of having this added aspect of ministry is hard to calculate, but for the sake of illustration, let me say that our presence at this festival was maybe ten times as effective as it would have been with just the ministry tent alone. The ministry tent is where the deepest impact happens. It’s where bondages are broken and people knowingly connect with God. But there was more traffic through the ministry tent because of the free food and drink and the fellowship and relationships that resulted from them. 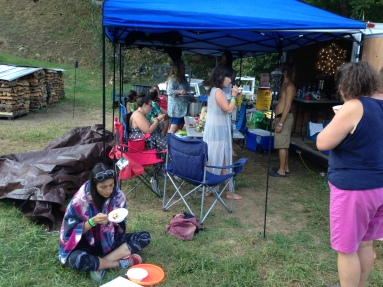 The importance of that fellowship and the relationships that follow can’t be overstated. This is where festival goers encounter people being Jesus at ground level. They are loved; even more importantly, they are liked. They keep coming back, not only for sustenance but just to sit and visit. Relationships deepen. Contact info is exchanged.

Contact info is exchanged in the ministry tent also, but the dynamic is different. It is that of one person needing help from another person. Sometimes, ministry really does continue afterwards with those who have received ministry in the tent, and a discipleship of sorts ensues. The friendships that develop over food, drink and conversation are different and invaluable. They are, I think like the friendships Jesus formed while on earth, with the mutual affection and easy interchange of people who like each other.

I really can no longer imagine doing outreach ministry without this dynamic. 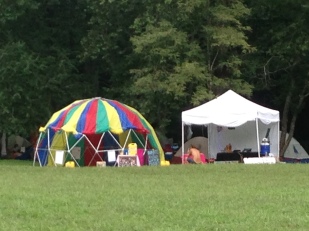 The encounters we had in the tent were very deep, quite numerous – one after another much of the time – and often very intense. Some were so intense I wasn’t able to talk about them even with others on the team. I still feel unable to tell some of the stories. There was what appeared to be more demonic manifestation than usual, all of which were vanquished as we remained steadfast in prayer and the authority we carry. As usual, many of those who came entered easily into a two way conversation with their Creator, who they either didn’t believe in or weren’t sure existed, and then were delightedly stunned when it was pointed out to them that the conversation had occurred (that’s one of my favorite things). There was one man who, through tears, said he was “stuck” because of a broken heart. My own heart broke for his grief. He left, not without sorrow, but no longer stuck, and free of guilt and shame. I watched his face light up with joy when it was pointed out to him that he had had a two way conversation with God. It’s just so cool that they don’t realize this is happening when it happens!

God is so wonderful.