← NOT How It’s Done
The Street Preachers Strike Again → 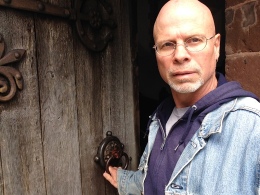 A few highlights from the Wild Goose festival:

“Lori” came in for ministry. Her higher power is the Universe. I got a word of knowledge and asked her to tell me about her grandmother. She spoke with enthusiasm about her grandmother who raised her. She said her grandmother was a Godly woman who was a beacon to all who knew her. “Lori’s” father was a pentecostal pastor, but “Lori” found that life wanting and she was put off by it. I told her that she was a Life Giver and that she carried the spiritual heritage of her grandmother, and she teared up. From that point, she spoke of God almost like she missed Him, like a friend not seen for a long time.. We became friends and we visited often over the next few days of the festival. I’m sure we’ll stay in touch.

“Kate” was brought up in a cult and had been severely wounded by it.She is an artist, but whenever she tried to create, she heard voices telling her she had no light to share, that she was a “dark thing”. She also would experience a choking sensation at these times. We began breaking off the lies she had been told by these voices, and she felt the choking. We rebuked it and it stopped. The lies were broken and “Kate’s” demeanor brightened, which is saying a lot, because she was already a very outgoing, cheerful person. She had worked hard at overcoming the darkness. I think we completed that work. She, too, became someone I hung out with afterwards. Relationship is so important.

“Susan”, who is in her early 20’s, had recurring dreams of broken glass due to a broken home. She had constant and chronic hip pain which I felt may have been due to emotional trauma. We broke off the trauma and “Susan” forgave several of the people in her life. I got a word of knowledge that she was a redemptive prophet and spoke into her identity based on that. She said she found that very uplifting and identified strongly with what I told her. She returned the following day to tell me that when she left the tent, her hip pain was gone and had not returned.

“Jess” came in with fear of letting people down, which we traced to a time when she woke her father when he was sleeping, and even though her father did not reprimand her or appear angry, she had carried the feeling she had done a bad thing by waking him. We had her ask God direct questions about this memory. She was completely rid of all guilt about it, but was most thrilled that she had had a two way conversation with God.

“Ann” came in, broken hearted over her divorce which had occurred a year prior. She said she said that she hated her ex and could not forgive him. She could not stop crying. I suggested she allow Lauren, the female on our team, to hug her, and she agreed. “Ann” hugged Lauren for 15 or 20 minutes, sobbing uncontrollably the whole time. When she was able to compose herself somewhat, she sat back down. We broke the soul ties between her and her ex-husband and “Ann” was then able to forgive him. Wow. Nice job, Lauren.

“June” came in with trauma. I released the trauma, which came out easily, though “June” was a skeptical sort. Not belligerent skeptical, just “show me” skeptical. As we were doing the trauma release, I asked if she was feeling any pain in her body, as often happens with trauma release, and she said no. Ten minutes after she left, she came back, saying that as soon as she left the tent, her left shoulder began to ache very badly. She was clutching her shoulder and wincing. I began to pull that pain off of her hand over hand as if it were a rope. She frowned, and looked very skeptical. After a few seconds, she said, “I hate to admit it, but it’s gone!” One of those funny moments.

We had a few folks return from previous years. I remembered some of them; it was a reconnecting with friends. There were others who told us they “felt drawn” to our tent and just wanted to see what it was about. People came, left, then sent their friends, family members and spouses to see us.

Those are just a few of the encounters I personally was involved in. There were more, and some of them would be longer stories and  harder to tell. My heart and mind are quiet and in awe at what I saw God doing in people’s lives during our time there. We have an amazing heavenly Father and brother in Jesus who fiercely loves people and is eager to bless them. I am so privileged to be a witness to such things.

What can I do for you? I would be more than happy to interpret dreams for you, or arrange a healing encounter either in person or on Skype or FaceTime. Just let me know.