Who’s Going To Burning Man With Me? 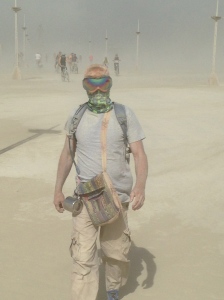 Well, once again, I’ve procrastinated and am late in starting to plan for Burning Man 2016. Every year, on the way home from Burning Man, I tell myself, the time to start planning for next year is now. I have yet to heed my very wise counsel.

Tickets usually go on sale in January, but there’s no word yet on that as the Burning Man org fights with greedy politicians who want to choke dollars from the burning goose. In any case, time is short for drawing a team together, which is the reason for this blog post. It is part of our larger vision to plant churches at festivals. There are what may be considered to be churches already planted at this one, including ours. We want to not only maintain that, but expand its creativity and increase its influence.

So who wants to go? We’re looking for reasonably healthy, independent, creative crazy people with ideas. We want people who can not only help us with our crazy ideas, but who might be able to come up with some crazy ideas of their own, if not this year, then in subsequent years. In other words, we want to draw attention at Burning Man. And in fact, we have. They kind of know who we are there.

Here are some of the things we have done at Burning Man:

We’ve built interactive art projects. We hope to build another one this year. Maybe you have an idea for an art project of your own.

We’ve done dream interpretation and healing in our camp. One year, we did a sort of good cop/bad cop thing, in which Phil did some hilarious card reading which always contained bad news for the person getting the reading, and then I would give a real blessing to the person with words of knowledge, giving them good news. Entertainment/drama which blesses can be very powerful and keep you very busy.

We have done dream interpretation and healing at Center Camp. There is space there for performance arts. I’d really like to see people doing something like that there.

We’ve hobnobbed with other Burners on art cars, in their camps, etc., to expand our impact so as to be a blessing to this community.

Going to Burning Man is not easy. The environment is harsh (it’s a desert). It’s expensive. Figure about $1,000 plus your travel expenses. And you’ll need a week or more of your time. And there will be preparations as a team member between now and then. But not only will you change lives there, your contribution will be spread much wider than the barren desert of Nevada. And you’ll be changed too. Burning Man will change you. I’ve found the change to be absolutely amazing. So will you.

E-mail me at huxleydennis@gmail.com, or reach me via Facebook.