Out Of The Dust

Burning Man 2015 has come and gone. It was, for me, a very different Burn (they all are), a difficult one (I was mostly alone with the same amount of work needing to be done – more, actually), and it was a thoroughly blessed, wonderful, fulfilling, life changing experience (again, they all are!).

There were the challenges of traveling across the country alone with a bad back (thanks to God answering the prayers of my intercessors, my back actually improved during the trip, which is definitely a miracle, since driving is one of the most aggravating things I can do to it), loading the stuff from the storage unit in Fallon, NV alone, setting up yurts with some help from the naked lady camped next to me and from Tom, one of the neon crew (they put the neon lighting on The Man) camped behind me, setting up the dome alone only to lose it, destroyed in the high winds the next day, etc., etc.

I had arrived on the playa Thursday, August 27. The gates opened to the regular ticket holders on Sunday the 30th. I began doing ministry at Center Camp on Monday. As I have the last two years, I grabbed a tall table – no chairs – that are there, and put up a small sign that advertises dream interpretation and spirit cleansing. The moment I set up, a woman approached and asked about spirit cleansing. I explained that I have been blessed with the ability to help people find issues in their lives, from hurts they have suffered and things they have done, that are interfering with their personal growth, with relationships, etc. She told me she had come to Center Camp to write a letter to her father who she felt very much wounded by because he was emotionally detached. She had never received any affection or affirmation from him. She wrote the letter as a way to bring “closure” and planned to place it in the temple to be burned when the temple burned. She had just finished the letter when she saw me and so came to my table. I led her in asking Creator for guidance, then asked her if she felt closure was the same as healing. She said no. Within minutes, after walking her through verbally forgiving and releasing her father, repenting of judging him and honoring him as her father, she was beaming with a bright smile on her face, obviously relieved. I said, “Let’s ask Creator if there is another issue He wants you yo deal with today”. She closed her eyes and asked, then immediately opened her eyes and told me she had been molested as a child. After breaking off the soul ties and forgiving her molesters, I prayed the trauma off of her. Wide eyed, she said, “Wow! I feel totally free from that!” I had her close her eyes and “look around inside” herself to see if any pain or shame from being molested remained. She did, then looked at me wide eyed, and said, “No! The memory is still there, but those other things are gone!” I asked her if she realized she had been having a two-way conversation with her Creator during our session (It’s amazing to me that people who profess little or no belief in a personal God enter into conversation with him so easily!). She laughed, joyfully, then immediately looked thoughtful. She gave me a big hug and was gone. But she was not in the same condition as when she came. 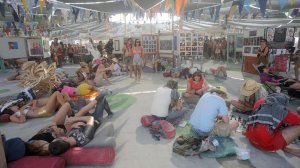 Jennifer, my campmate, arrived very late Tuesday night or Wednesday morning and joined me at Center Camp on subsequent days. She did prophetic art for people as I ministered to them and did a great job. People were moved by the art she created and were glad to receive what she had drawn for them. At one point, during a lull, I was talking with Jen about God being a God of liberty, not of rules and bondage. As I was talking, a man walked to our table and began listening to our conversation. He joined in by saying, “I am a Hindu man from India. In Hinduism we have a hundred thousand gods. Hinduism teaches that a person’s life is determined and controlled by whatever gods are within them”. I said that I believed that there is one God, and that He wants to live through us, but only does so if we let him, because love must allow for free will. He excitedly jabbed an index finger into the air and said, “That MUST be what God is like!”

At that moment, a grizzly old Burner, probably in his seventies, also joined us, listened for a bit, then said he was agnostic about God, but did believe that love must include free will, and that if there is any evidence there is a God, it is found in the effect love has on the world, and that, therefore, if there is a God, He must be a God of love. Again, our Hindu friend became excited, and said, “This MUST be what God is like!” Sometimes, the spontaneous stuff is the most effective and exciting! I believe that Hindu man went away having had his own personal thoughts about God affirmed and articulated in that brief conversation. I gave him my contact info. I hope to hear from him again.

I went to Center Camp from Monday through Saturday, but skipped Friday. The encounters were many. The effects were evident in smiling, changed faces (yes, people’s faces actually change during these encounters. They often look ten to twenty years younger afterward). But I’d be lying if I said they were all successful. One gay man came, full of self condemnation. He is a perfectionist, and like most perfectionists, feels nothing he does is good enough and that he continually lets his loved ones down. The Lord got him to repent of relying on the acceptance of others in order to feel worthy (after explaining to him that repentance in this case was NOT about failure, shame or guilt, but about a changed mind), and he brightened up. I then tried to facilitate a conversation between him and God, and he got one or two preliminary answers, but when I had him ask God if He loved him, that was the end of it. He could not hear God saying that, and he became emotional. I told him this was an issue he needs to overcome, because God does truly love him. He left, but came back later with gifts for Jen and I, and thanked us. I also gave him my contact info. I pray blessings on him.

Burning Man is not an easy outreach. It requires more resources, time, effort, takes the biggest toll on my body and mind and equipment of any outreach. Every year I ask, is it worth it? I’m asking again. All I know is, I feel compelled to be there, and people are set free and brought nearer to God because I am there. And I’m not qualified to place a value on that. So while I wonder about those things, there never was any question about going. So, by God’s grace, I will continue to go. I’m more grateful than I can say for those who were with me in spirit, offering encouragement, prayer and support.