I hurt my back on Monday. Today is Thursday. I hurt it so bad that I looked like a question mark if I stood up. This was terribly inconvenient for several reasons: I had some work that would have provided some much needed money for the trip; I haven’t been able to get any of the eleventy seven things on my to do list done; I wasn’t able to sit at all – only stand (sort of) or lay down. Since going to Burning Man involves 48 hours of driving, and driving necessarily involves sitting, that’s a problem (I’m going alone this year). It’s better now, but sitting is still painful. 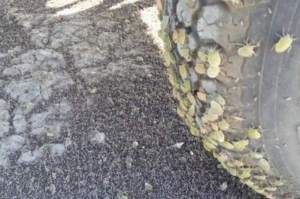 You may have heard the reports of bug infestations at the Burning Man site this week. It’s been in the news. There are several different species of bugs swarming the Black Rock Desert including green stink bugs, something called a seed bug, and mosquitoes and apparently it’s really disgusting. Usually, there are very few bugs there. But I’m going.

Several of my friends will NOT be going, and a couple of them are people I only ever see at Burning Man. It’ll just be myself and one person I’ve never met in our little camp within the larger village of Gigsville. But I will have some friends there. In any case (Lord willing), I’m going to Burning Man.

It has been my favorite festival, probably still is. I love it there. I love the desert, I love the festival IN the desert, I love the festival goers. But I’m not sure those things are enough to compel me to take three weeks of my time, put another 6,000 miles on my aging car, plus the expense (I’ll probably have to pull out my credit card again, thanks to the back problem. I hate that). I’m just not the kind of guy who goes on vacations. Vacations bore me. But compelled I am.

There will be around 70,000 people there this year. How many will I minister to? Thirty people? Forty? There are, thankfully, other groups ministering at Burning Man, each one a little different, appealing to different people and most of them reaching many more than I will because they have large teams. And I’ll reach thirty or forty that they would not have come into contact with.

That’s why I MUST go. I know what St. Paul felt when he wrote “Woe is me if I preach not the gospel”.

I have to go for the thirty or forty.

Thirty or forty people will be set free from some form of torment because I’m there, not because of any power I have, but because I take them to the Throne, to the One who loves them. Who created them. Some of those will establish the beginning of their lifelong love affair with this Creator.

That’s it. That’s why I go. It’s why I MUST go. I cannot do otherwise.