← The Invasion of the “Dones”
Transformational Festivals Need Missionaries → 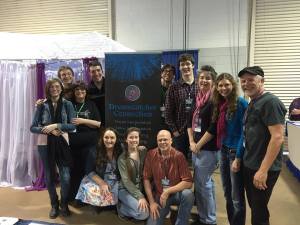 This last weekend I participated in an outreach at a New Age expo in the Bible Belt. There were about 10 young people, many of them teenagers, and maybe a half dozen middle aged adults. The young folks had been discipled very skillfully by my friend Papy Fisher, and the event was led by my friend Kelly Williams who had also helped train them for this type of ministry. This was by far the most mature group of ministers I have ever had the pleasure to work with. There was zero drama. The young people ALL chipped in to do the grunt work and got it done quickly. No one had to be reminded or cajoled into not shoving Jesus down the throats of those we encountered (for the record, attempts to “cajole” ministers into not doing that usually don’t work. Their reason for not complying is always the same: “The Holy Spirit told me”). It was one of the smoothest, least frustrating outreaches I have ever been a part of.

We had a line outside our ministry tent all the time on both days. We had three or four teams going all the time and each team went from one encounter to the next with only occasional short breaks. I’m certain that no one went away disappointed. As usual, nearly all went away closer to their Creator than when they came to us. Several became very much open to considering a relationship with Jesus. A couple (at least) surrendered themselves to Jesus’ care. Several were happily surprised at the end of their encounters when it was pointed out to them that, during the encounter, they had had a two way conversation with God. That is usually the point at which the light really goes on for them. Their jaws drop. They smile, or laugh, or cry…

I personally ministered to at least two New Age folks with similar stories. They each believed in a plurality of gods, and in the Universe, but had grown very concerned and confused over where their spirituality was headed. They had even had some creepy experiences. Neither was in a place where deliverance ministry was in order (they had both talked about spirit guides) and neither could entertain the possibility of one God. So, among other things, we led them through a process of asking the Spirit of Truth (the Holy Spirit is the Spirit of Truth) some questions. They were easily convinced that they needed protection, that the spirits they had been listening to were manipulating them, and that since their spiritual lives had become so confusing, they should speak to and ask only the Spirit of Truth to teach them, help them, guide them and protect them.

This was the second time I had ministered at this particular event. Being in the Bible Belt, a lot of Christians and former Christians come. They come because they are desperately hungry for genuine spiritual life. How sad it is that they are unable to find it in their churches. They express their frustration as they tell their stories. Those who still hold to their faith seem embarrassed about at a New Age event once they find out we are Christians too. But they’re hungry; starving, really. Who can judge a starving person who steals a piece of bread?

One woman came to us desperate for answers. I tell her story because it’s fairly typical. The Holy Spirit had revealed to us that she was prophetically gifted. She had been raised Jehovah’s Witness, but left it as a young woman because it was empty and dry, and started going to a Pentacostal church, but likewise found it empty and was unable to find answers there that made sense to her. She was desperate for answers. I felt led to share my conversion story, which helped a little, then we walked her through asking God questions, and listening for answers. That was a real breakthrough for her. When we pointed out she had just spoken to the Creator, her face finally lit up and the weight she came in with fell off her shoulders. We talked to her about journaling and asking God to show her the answers to her questions and spoke to her about her destiny and giftings through words of knowledge.

I thank God for such an amazingly loving team and for His prophetic anointing which convinces people that God cares about them and brings healing to their wounded hearts! Thank you for your lovingkindness, Lord, and for using your people in such mighty ways. Thank you for Your calling on each of our lives. We are here: Keep sending us!